Don Neville, managing director of RichardsApex Europe Ltd, the UK subsidiary of RichardsApex Inc., USA – was named chairman of the International Wire and Machinery Association at its Annual General […]

Don Neville, managing director of RichardsApex Europe Ltd, the UK subsidiary of RichardsApex Inc., USA – was named chairman of the International Wire and Machinery Association at its Annual General Meeting on February 9. He knows only too well the challenges both his chairmanship and the wider organisation face during his three-year tenure. We asked him what he sees as his main tasks in the coming months.

American-born Don Neville (67) has been in the wire and cable industry since 1990, and takes up the position of IWMA chairman from popular leader Martin van der Zwan, who in the face of the pandemic agreed to stay at the helm for a fourth year, to give the association greater continuity.

“I know I speak for the entire membership in thanking Martin for his commitment and dedication to the association during these extremely frustrating times,” said Don. “He saw us through our 50th anniversary and rebrand – sadly without the celebration we had planned for the ultimately-cancelled wire Düsseldorf in 2020.

“But the lack of fanfare in no way diminished the significance of our milestone anniversary, nor the contribution Martin has made as chairman. He will now be joining our advisory committee of past chairmen, and I know his continuing contribution will be of enormous value to us all.”

As a senior member of IWMA’s management team, Don is well aware his own chairmanship will have challenges: “We reckon it might be as many as three to four years before we get back to pre-Covid funding levels, for example,” he explained.

But he also recognises that the reverse is true: the devastation – “it’s not too strong a word” – of the past two years also presents opportunities to give IWMA new impetus and benefit for its international membership.

“All organisations begin to get set in their ways the longer they are around,” Don suggested. “There aren’t many associations like IWMA that have been around for 50 years – so if nothing else, the pandemic has given us a chance to shake things up. Few organisations in this field have our breadth, expertise and international reach – we have members on just about every continent.”

The pandemic, he says, has helped IWMA’s board think about what the association does and in which direction it should be heading.

“New things have already come out of Covid,” he added. “Leaner work practices, new ways of working, online meetings and so on. As an organisation we have always been highly flexible, so the pandemic gave us the chance to implement, relatively easily, online technologies that weren’t around even a decade ago to everyone’s benefit. We all now mostly prefer to talk online from wherever we are in the world than spend days on planes for something that might last a fairly short time. It makes meetings more inclusive too, allowing members a voice who wouldn’t before have considered making the trip.”

Exhibitions are a different matter, he adds. “There is really no online substitute for Messe Dusseldorf’s international shows – we’re all missing them a lot. Hopefully wire Dusseldorf will go ahead this year and things will get back to a state closer to normality in the coming year.”

The new chairman also sees the length of his tenure as an opportunity: “If you’re a politician, or even a CEO, you might work across a year or so at a time, and there’s little chance to do much more than keep things running smoothly. Over three years you get the chance to consider ideas longer-term: even if you don’t get the opportunity to complete them all, you can build foundations that will propel the organisation for years to come.”

In which areas does Don believe IWMA can build for the future?

“Education, certainly,” he says without pause. “I had an interesting conversation with a CEO recently who was lamenting the difficulty in finding new hires with even an inkling of how a machine might work, let alone a specific production process­. Most company bosses are desperate to provide continuity within the industry, so where do we go for our newcomers, and how do we train them?

“It’s not as if you can go – as far as I’m aware – to a specific school or university to study the intricacies of cable-making, for example. There’s nothing that will take a youngster from the fundamentals of what a machine is and does, to the mind-boggling science behind the work of some of the world’s brightest engineers.

“I am very keen to see in what ways IWMA can help to maintain our members’ breadth of expertise and pay it forward to recruits – perhaps even encourage the brightest newcomers to consider wire and cable first. As an industry we need to find innovative ways to improve the way people are helped and trained,” he said.

“One way will be for IWMA to further expand its education and training role, for which, with the right content and industry-wide accreditations, funding may be available. Members have asked for this: they want to know where they will get the next generation of operators, process supervisors and other specialists, and we think as an association we should try to preserve the vast amount of specialist knowledge member companies have in their ranks. It won’t be a wholesale move into education, but it will mean identifying opportunities with members for ways to improve skills development within their organisations”.

The other major rock on which IWMA’s immediate future will be built, Don suggests, is that of communication.

“In the past, networking has been a central part of our activities,” he admitted. “At exhibitions and conferences we have talked to each other, but not necessarily to members in other industries, or indeed to the public at large. Our members are involved in some of the most amazing projects on the planet and it should be part of our role as an association to speak up for them.

“I’m really looking forward to talking to our members from around the world about what they need and what we can do to help them be more successful. At 50 years old, we don’t want to be perceived as an anachronism; quite the opposite. We have half a century of wide industry experience and a body of knowledge among members that defines us as both modern and truly expert.

“We have some of the world’s leading companies in their field among our members, and within those companies are some truly iconic names of the manufacturing, design and engineering world. Some of our members are pushing back the boundaries in green energy and sustainable manufacturing, for example; as an association we should be a knowledge, information and media hub for members, drawing the world’s attention to their achievements.”

As he suggested, one thing Don can’t wait to see return is the annual run of wire and cable exhibitions. The pandemic has shown that not every conversation has to be with everyone together in a room but, he suggests, communication at exhibitions is one thing that can’t be supplanted by an online presence.

“Messe and its partners have introduced more shows around the world in recent years for a very good reason: they expand business like nothing else,” he explained. “For most of us, exhibitions can’t return quickly enough; there’s a huge pent-up demand.

“To help our smaller, newer member companies attend these shows and understand how valuable and useful they can be, we already offer them business and hospitality services on the IWMA stand. We will be exploring ways to expand and enhance that support in the future.”

As Don spends his first few weeks as chairman, he sees an IWMA continuing to evolve and developing new, more innovative ways to stay in touch with its members.

“We want to give even greater value and benefit for the fairly modest membership fees,” he said. “When I look back on the next three years I want it to be on an IWMA that has become more aware of its members’ needs and is more responsive and supportive towards them and the industries we all serve, and that our diverse global membership continues to thrive.” 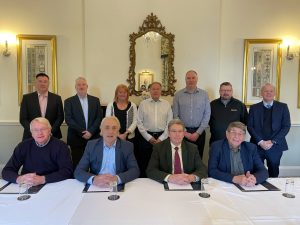 Members of the IWMA Executive Management Committee meeting on 9th February for the first in person meeting since 2020 to welcome Don Neville as the new chairman.